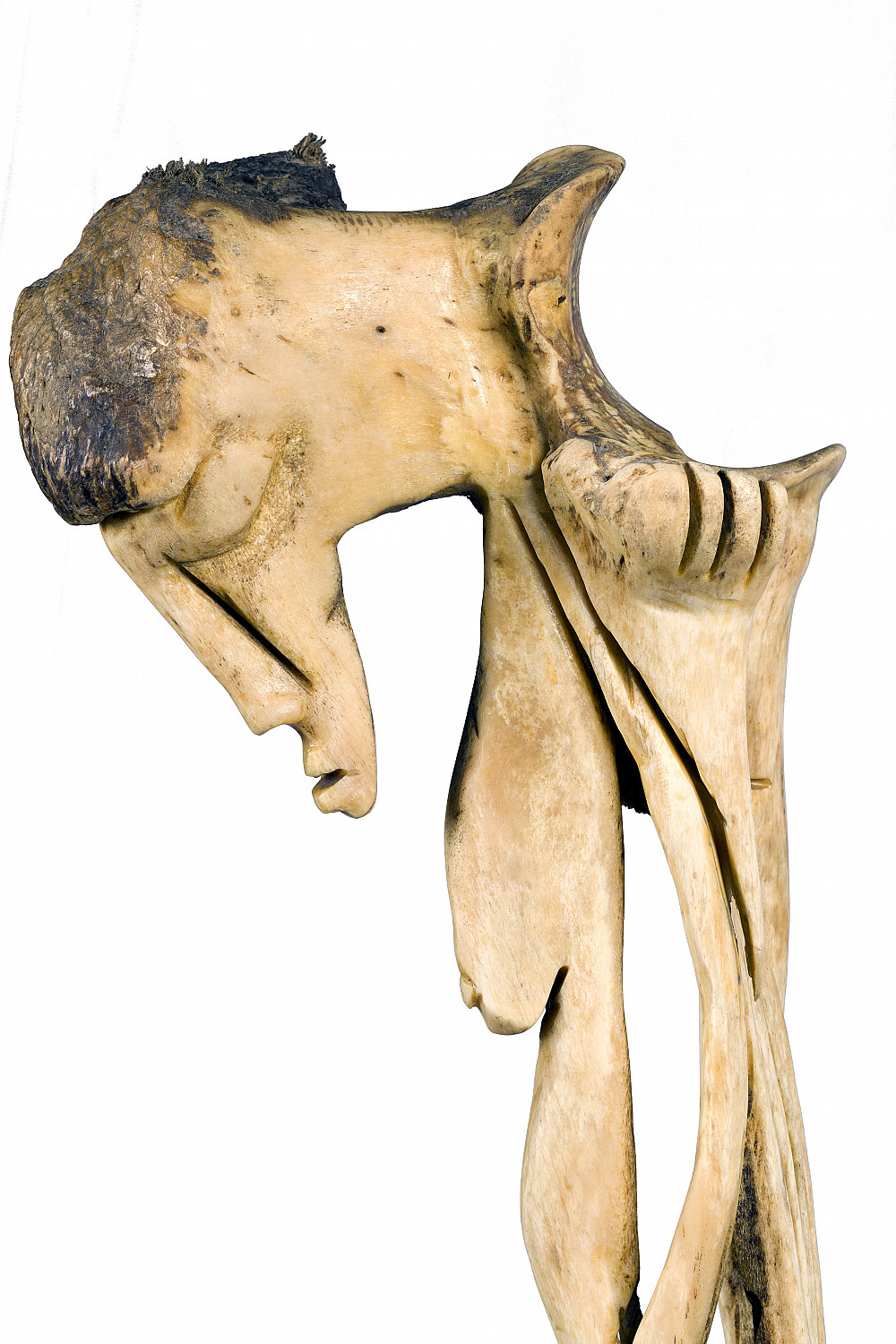 Pitika Ntuli is an isangoma (seer, diviner, visionary), and this means that he stimulates spiritually bonding processes. This is a theme that receives considerable discussion in an earlier journal article (Maithufi 2016) on the essay Ntuli published in Scent of Invisible Footprints (2010), the catalogue that accompanied his first ever exhibition in his own country at Museum Africa in 2010. The catalogue comprises images of his metal, stone, wooden, bone and bronze sculptures, together with his poetry and prose.

‘From Marikana Hill to Constitutional Hill’, an exhibition at Constitutional Hill of his ‘Monument to Marikana’ in 2013, comprises only metal works, prompting a consideration of the depths of inspiration that he leverages from concentrating on a single medium at a time. This is the key theme that this essay foregrounds – albeit with reference to bone sculptures which are at the core of this exhibition: ‘Azibuyele Emasisweni (Return to the Source)’.

I argue that this exhibition deepens and sharpens his reflections on divination in Scent of Invisible Footprints. In its unfolding within the virtual space, a necessity under the restrictions imposed by South Africa’s response to Covid 19, the show will re-present and engage audiences in a unique way. I begin by analyzing three of the bone sculptures, locating them within a theoretical context, and then venture into the anthropological roots that inform Ntuli’s creativity.

As with the works in his 2010 exhibition, the bone sculptures of ‘Azibuyele Emasisweni (Return to the Source)’ are awash with their own form of realism. This mode should not be considered linear and teleological. Instead, it should be carefully contextualised by taking into consideration Ntuli’s calling as an isangoma. For Pitika, art, sculpting to be precise, is integral to the twasa, which is the calling to be an isangoma. I find the three pieces I am analyzing in this essay to be irresistible teasers. This is mainly because, in viewing the sculptures through touch screen technology, they seem to accentuate alterity – the goal of divination. Each sculpture resonates in its accompanying poem and caption. In all three works the bones have been sculpted into anthropomorphic figures, and this theme of anthropomorphism points to the integration of the worlds of animals and human beings that is so fundamental to African traditional knowledge.

The first, ‘Spirit Medium on Fire’, is a construction of a human being, a figure standing upright on two limbs, which are perhaps the remains of a gigantic animal such as a rhinoceros, and the upper body is built from the shoulder blade bones of another huge animal, perhaps an elephant. Because Ntuli has straightened the torso, to convey the image of a human being the shoulder blades are facing downwards, as opposed to their natural sideways positioning. In effect, the blades seem to be hanging loose behind what would have been the pelvic region, as if shielding it from an intruder’s gaze. By virtue of being dressed in a short beaded-skirt, this may be interpreted as the representation of a woman.

In contrast to the first sculpture, ‘Inside the Elephant’s Womb’ is almost a-sexual. It is constructed from an up-turned pelvic bone with the skull of a big mammal at its zenith. Possibly, in order to achieve stability, the latter skull is sat on the wheel drum of a motor vehicle. One side of the pelvis is adorned with a traditionally male hairstyle and the other with a female, and a dreadlocked, bead-bedecked skull sits at the apex overlooking the empty depth of what would have been the internal organs of the upper body. The eyes are a prominent feature as in the majority of his sculptures.

The third sculpture, ‘Swimming Against the Tide of Love’, is an intriguing contrast to the two above. The concept of dance, which is perhaps implied by the animated posture of ‘Spirit Medium on Fire’ and the flowing movement of ‘Inside the Elephant’s Womb’, is explicit in this third sculpture which engages a play on dance. On the one hand, the subject is presented inside the open skull of a predatory animal, perhaps a crocodile. On the other hand, s/he is presented in the same action while perched on the image of a tibia of a gigantic animal, perhaps that of an elephant. In contrast to the representation of the slayer, the upper end of the tibia is articulated in insinuations of a set of breasts.

Ntuli’s anthropomorphic bone sculptures are neither art for art’s sake, nor are they  dependent exclusively on one medium. Ngugi (2007) argues, citing Ntuli’s art as an example, is in line with ‘orature’ which he as the ‘porosity and interpenetration of genres’. He is building on the concept developed by Pio Zirimu in the early 1970s to counter the predominant tendency to view art forms communicated orally and received aurally as inferior to written literature. Significantly, Ngugi deploys orature to explain the extensive degree to which human beings negotiate reality through performance. The context in which Ngugi invokes orature is the rise of performance studies in the academy. The rationale behind this theorectical development was to account for systems of artistic thought that make ‘visible’ the ‘invisible’ through ‘performance’.

Seen through Ngugi’s discussion of orality, Ntuli’s bone sculptures foreground a practice which precedes the development of cultural theory in the twentieth century. I propose that this practice resonates well with the concept of the ‘third dimension’ which, intriguingly contributed to the radicalization of avant-garde arts around the beginning of the twentieth century.

In my view the sculptures give momentum and nuance to the affirmation of Africa, in the context of the ongoing perpetuation of the unequal North-South relations. Writing in 2013, Irmgard Emmelhainz, argues that ‘the creative, political and mediatic fields are intrinsically linked’, leading to ‘a social order in which art has merged with life, privileging lived experience, collective communication and performative politics.’ From this premise, Emmelhainz goes on to conclude that contemporary art is at the behest of ideology, in so far as ideology creates individuals as subjects and consumers.

Far from being a product of consumerism and a culture of commodification in crass capitalist terms as Emmelhainz describes art in what he calls contemporary times, Ntuli’s art enunciates the contemporary outside of the Gregorian calender. He does so within the classic African time system, to be precise. This is also the system of thought that probes the third space, in the terms of, for instance, Robert Thompson (Baldwin et al. 1987). Thompson argues that this space foregrounds how African idioms, the BaKongo mask, for example and modes of cognition influenced avante-garde artists. Ntuli highlights this third space by sculpting human beings in interconnectedness with animals. This link is possible and awash in African senses of cognition and those values that highlight the importance of the ecosystem. Divination is about coaxing a subject into a harmonious relationship with him/herself, family, community, society and the universe. At the heart of all this is the transference of energy and spirit, demonstrated in ‘Spirit Medium on Fire’, as well as in his other sculptures and performance poetry, the latter employing the call and response pattern.

In this concluding section, I return to the sculptures analysed above, and discuss the theory of divination in which Ntuli grounds his art; a theory that recognises an African world view in its own right. It is my contention that this theory is informed by a unique form of tradition, in which the subject is defined as an integral part of the ecosystem, and in terms of the broad principles that underpin cosmic harmony and justice. For emphasis sake, I quote Ngugi’s (1998) observation’s on Ntuli’s ‘orature’ at length:

“He talks about how he uses his environment wherever he is to see and make visible the hidden connections between phenomena. He talks of salvaging and humanizing objects, exhaust pipes, gearboxes, saucepans, curses, insults, appreciation, grey clouds, monotonous terraces, old patches of colour in parks, human touch, frustrations and hopes, all in his war against ugliness…”

In the same text Ngugi further quotes Ntuli on Orature: “Orature is more than the fusion of all art forms. It is the conception and reality of a total view of life. It is the capsule of feeling, thinking, imagination, taste and hearing. It is the creative spirit… Orature is the universe of expression and appreciation and a fusion of both within one individual, a group, a community. It is a weapon against the encroaching atomization of life. It is the beginning come full circle on a higher plane.”

Diviners (Isanusi or Seer) use bones to diagnose affliction. The divination space is a ritual theatrical one, comprising the diviner and the subject in an interactive engagement that is supported by an array of multi-media paratexts. Each prop including music, dance and visual art, is deliberately harnessed in order to enhance communion keeping with what the subject appears to desire and need. These props may be aspects of everyday life in their original forms or adapted for divination purposes. In the context of all these props, bones seem to carry a significance that far exceeds local religious or spiritual nuances that might seem obvious in African languages and cultures. As the ultimate and indestructible genetic template, the knowledge of where a loved-one’s bones have been interred has always coaxed derelict and destitute human beings out of psychological or spiritual adversity and political quagmires.

In conclusion I would like to emphasise, firstly, the connection that I have made between anthropomorphism and orature, that is the union between human beings and animals that Ntuli’s bone sculptures epitomise. The second is the intensity of the experience, and the profundity, when Ntuli says that the life of bones ‘possesses’ the sculptor as he externalises their inherent shapes so as to capture their beauty, their truth and their spirit. From this, I propose that a solemn, spiritual as well as imagined, journey takes place during sculpting as Ntuli (2010) captures so well:

“A grain of wood, or stone, even bone, is shaped by the fluids that have passed through it. In other words, each material that I use retraces the journeys of its juices, to reflect them, to quote them! The wood must dry up before it is used. Metal must first be melted. The bone must part with decaying flesh and wait for the marrow to harden before the work begins. To sculpt, therefore, is to revisit the original state of the material, to externalise its fluidity.”

And finally, that in migrating the exhibition space onto a virtual platform it appears that Ntuli is extending the definition of orature by empowering audiences in ways that will have to be explored at length.

(Praise singer depart as you have praised him

You praise him not knowing his name

His name is multifaceted)

Ngugi wa Thiongo. 1998. ‘Oral Power and Europhone Glory,’ Penpoints, Gunpoints, and Dreams: Towards a Critical Theory of the Arts and the State in Africa (Clarendon Lectures in English). Oxford: Clarendon Press.